People who think that the Earth is flat should take a look at how the tech world is spinning currently in Lisbon. It’s the second day we have prepared top Web Summit takeaways from a huge number of ultra-smart speakers that blew our human minds.

For the lucky ones who are attending the conference and for those who are watching it on their screens from different corners around the world, we have prepared top Web Summit Takeaways of 2018 — Day 2 to prove that it is the ground zero for the tech ignition.

Here’s the list completed with short comments, few jokes here and there and some pictures with us hunting down some genius minds.

Every morning during the Opening Remarks, the Founder and the CEO of the Web Summit, Paddy Cosgrave, keeps reminding us that this conference, like any other, at its core, is all about the people who are coming together. Besides all the fantastic speakers on stage, this is the place where the world’s most incredible entrepreneurs have gathered and are connecting with one another. Paddy, we are nodding in approval on that! 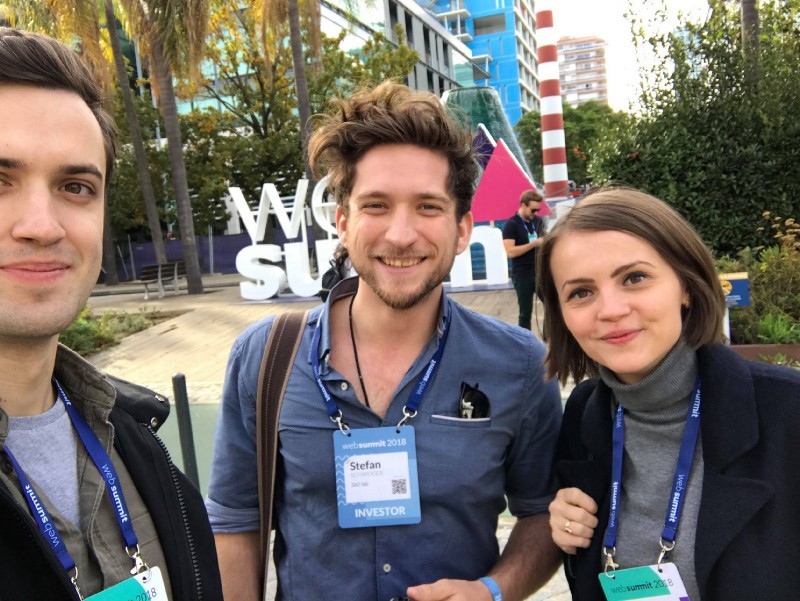 #2. Is the future of search visual?

The first speaker to step on the Centre Stage was Ben Silbermann, CEO & Co-Founder of Pinterest. “Our belief is that technology tools should make you happier.” Together with Lauren Goode, Senior Writer at Wired, they’ve discussed why social media platforms like Pinterest have a responsibility to make people more fulfilled overall. 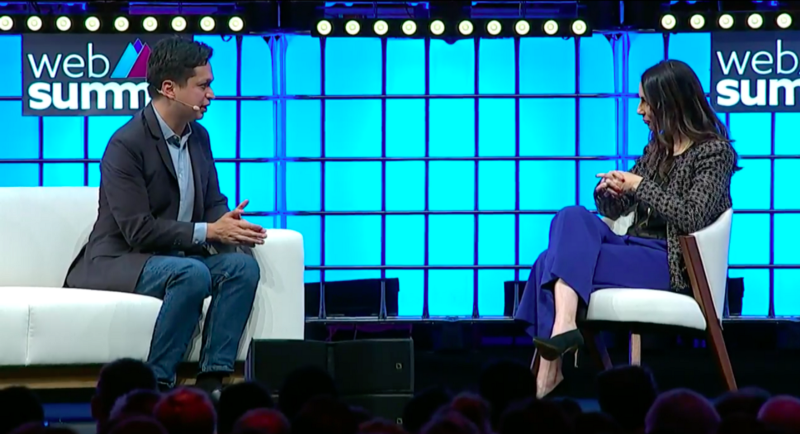 “The future goal is one day to open Pinterest and have that feeling that behind is a friend who knows everything about you, who will show you the right thing at the right time. This can be easily achieved through Visual Computing and Machine Learning.”

Our Web Summit takeaways could not ignore the titans like Tinder founder Sean Rad and former Twitter CEO Dick Costello. They have tackled the ‘what’s in store for the world’s biggest social media platforms’ topic, and have discussed accountability, the future of tech, and how organizations should create a design in which all the voices throughout the company and the community are included. 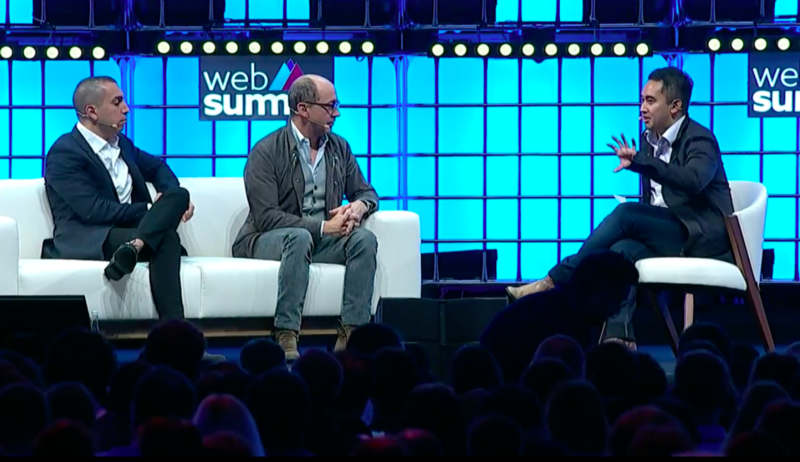 "Today you have all the tools in this world to be who you are. So you also want to define yourself at your workplace and make your work matter. Creating a why on every level of your organization is more important than ever."

There was one thought which is very appropriate for the following period of tech transition when we kind of forgot how young tech is and we’re still trying to figure out how to manage the issues that have appeared on the way.

If we could, we would just Swipe Right and give Likes to every single thought these two had. At least we highlighted the most valuable in our Web Summit takeaways list.

#4 The Iron Lady of the Tech Industry

European Commissioner for Competition, Margrethe Vestager is the well-known figure for being capable of slamming with an effortless grace the Big Names of the Tech Industry. This time she brought to everyone’s attention why building a fairer digital economy is crucial at this very moment. If listening diagonally to her talk, one thing that stands out is that putting the data in the hands of just one company is extremely unhealthy for the innovation. 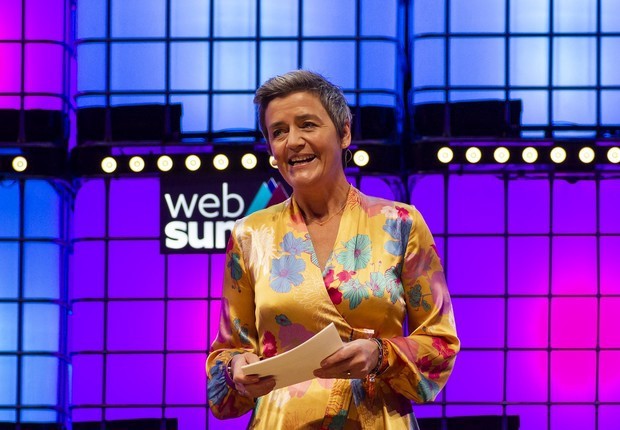 "What happens online, doesn’t remain online anymore. Authorities need to step in and fix it. The Internet is not a wall. The world runs on innovation. Without rules, you can do a lot of things. The innovation we want is not an innovation around the rules."

Watching her addressing the tech issues with such a meticulosity there’s no doubt that the time has come to the end for the “digital world” to escape the rules.

"No need to ask people to give values such as democracy or privacy in the name of innovation." — Margrethe Vestager

Don’t expect kids to be talking about Barbie and Ken anymore, when there are Sophia and Hans — two humanoid robots who look, think and talk (almost) just like we do. Yesterday, they have stepped in front of the Web Summit audience in order to talk together with Ben Goertzel, Chief Scientist, Hanson Robotics about Singularity Net and the evolution of AI. The idea is to create a decentralized AI ecosystem where anyone in the world can contribute to the data. It’s good to remember:

“The AI learns from everything it does.” 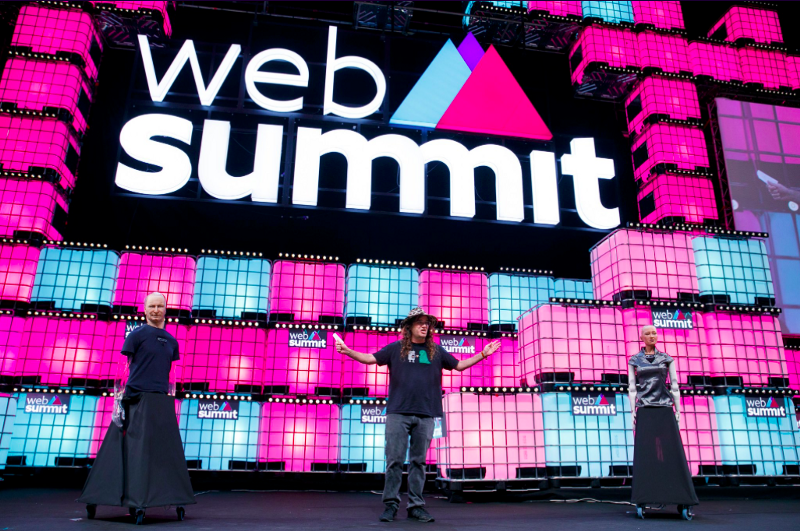 Unfortunately, along the history humanity has proven this to be its Achilles heel. Somehow we keep on repeating the same dumb mistakes when it comes to humanity. There might be a bug somewhere in the human department. Maybe along with our Web Summit takeaways on technology, we will start fixing our human part too.

#6. Digital peace in the age of cyber threats

Talking about bumping our heads to the same wall again and again. We hope these Web Summit takeaways will keep you from doing it again. Brad Smith the President of the Microsoft Corporation, has come to Lisbon to share this utopian idea that the world needs to apply the lessons learned from the conflicts of the 20th century to address the cyber attacks we face today.

"The technology revolution requires a “moral revolution”. The world failed to learn. Technology kept emerging. Humanity has invented the ability to destroy itself."

— Brad Smith the President of the Microsoft Corporation 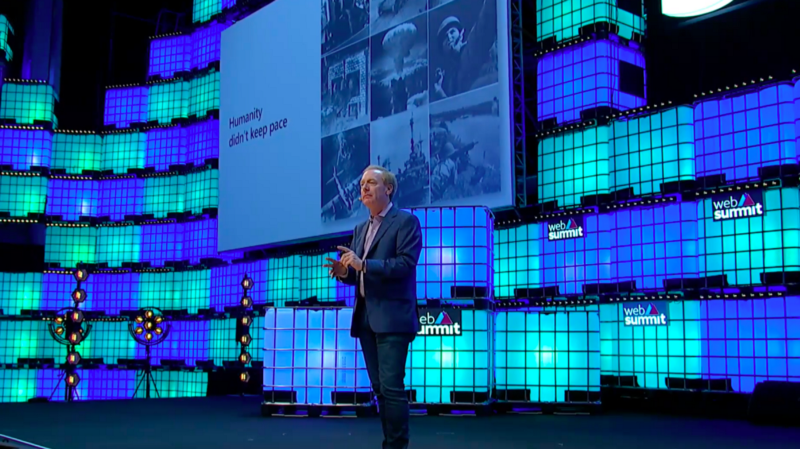 Bringing the past and the future face-to-face and showing that in order to keep under control the power we have created, we need to address growing threats and act collectively. In this game, the world’s governments, the tech sector and the citizens of the world have to cooperate on the same level.

#7. Creating a culture of radical transparency

This one is close to our hearts and our team. If you take a look at the Wolfpack Digital values, the number one is Transparency. This is the green light which we are guided by throughout all our daily activities and general mission.

Ray Dalio, Founder and Co-Chief Investment Officer & Co-Chairman at Bridgewater Associates, has presented the concept of meritocracy and how organizations can build their culture with honesty at its core. Basically, meritocracy stands for meaningful work and deeply meaningful relationships gained through radical transparency. 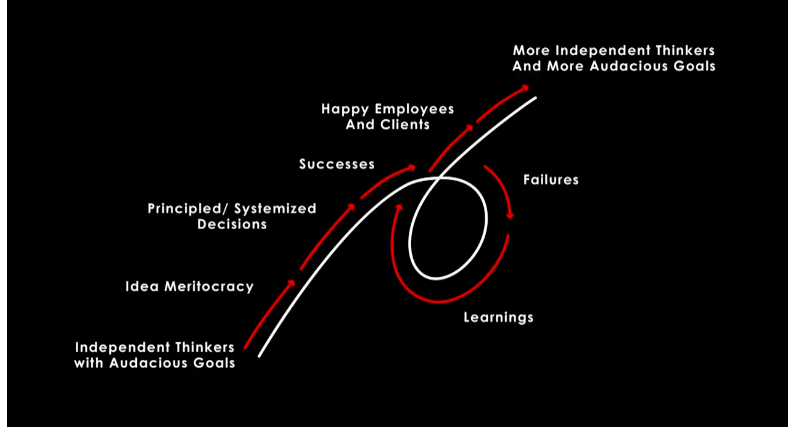 Here are the five steps to successful decision making according to Ray Dalio:

The real question with Meritocracy is whether or not is important for you to find out what are people all about, including yourself. Do you want that radical truthfulness and transparency? Make sure to apply these Web Summit takeaways including:

"Appreciate the art of thoughtful disagreement." 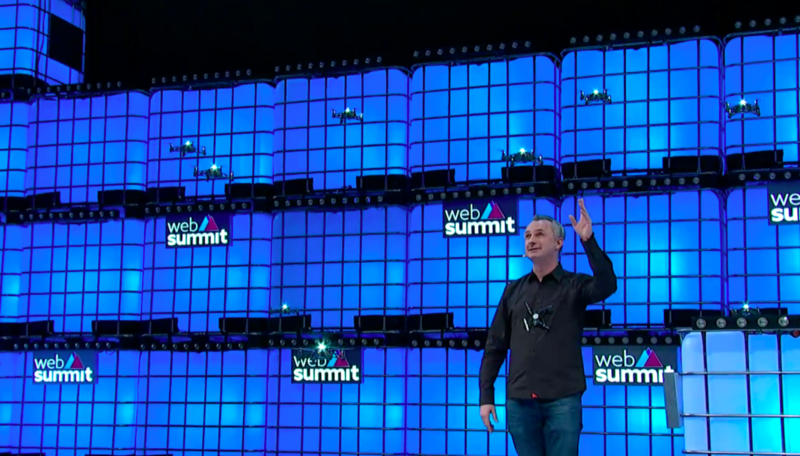 Technology Vision 2018 unleashed by Yves Bernaert the Senior Managing Director at Accenture must be shared with you within our Web Summit takeaways: 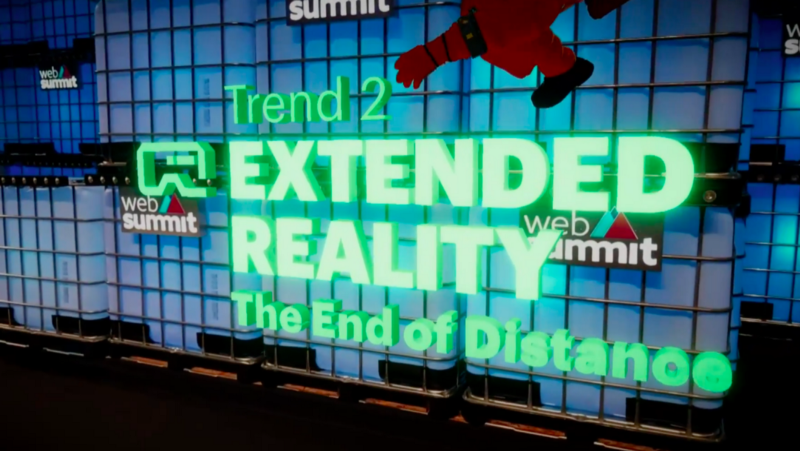 Technology is good, innovation is great, but mental health is essential. Our favorite moment of Day 2 was listening to an inspiring panel on burnout and how to prioritize mental health. Listening to Alex Tew Co-founder & Co-CEO of Calm — a software company that produces mindfulness meditation products, was something we were excited since we’ve heard he was going to be a speaker. We say this topic deserves much greater attention with all the pressure coming our way from the rapid changes and “innovation earthquakes”. 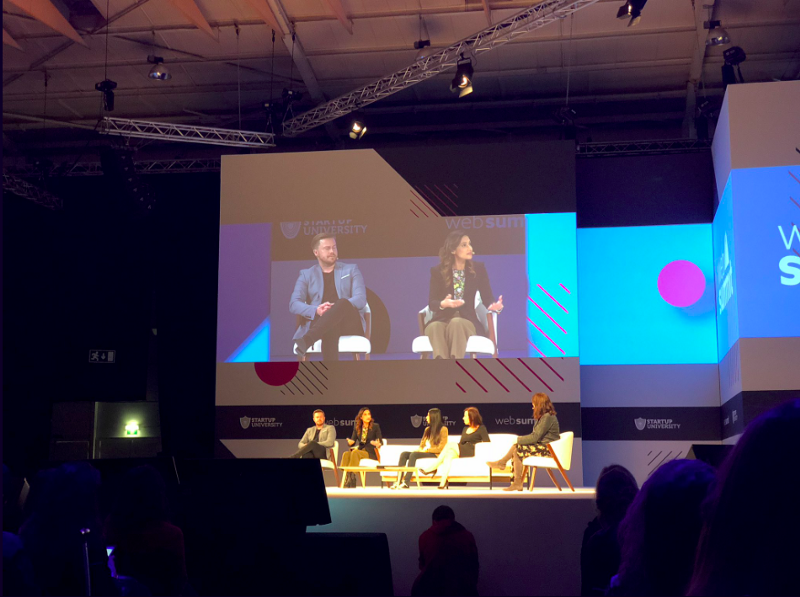 The subconscious mind has a chance to share its insights.”

We have developed an in house mobile app called Medusa — first mindfulness mobile application with content in Romanian. This product grew at Wolfpack Digital as an internal initiative aimed at having a positive impact on the emotional wellbeing of the local population, given that it’s proven that listening to recordings in one’s native language has a more powerful effect on the subconscious than listening to recordings in another language, regardless of the high level of proficiency.

Yesterday was a day full of fruitful meetings with great entrepreneurs from various countries. It was all about building relations and figuring out how to innovate around some of the fast-rising industries. What we have come to realize and include in the Web Summit takeaways list, is that it doesn’t matter where you come from, what technology you are working on, or how much experience you have on getting up when something didn’t work — we are here to connect for the sake of making this damn world a better place. 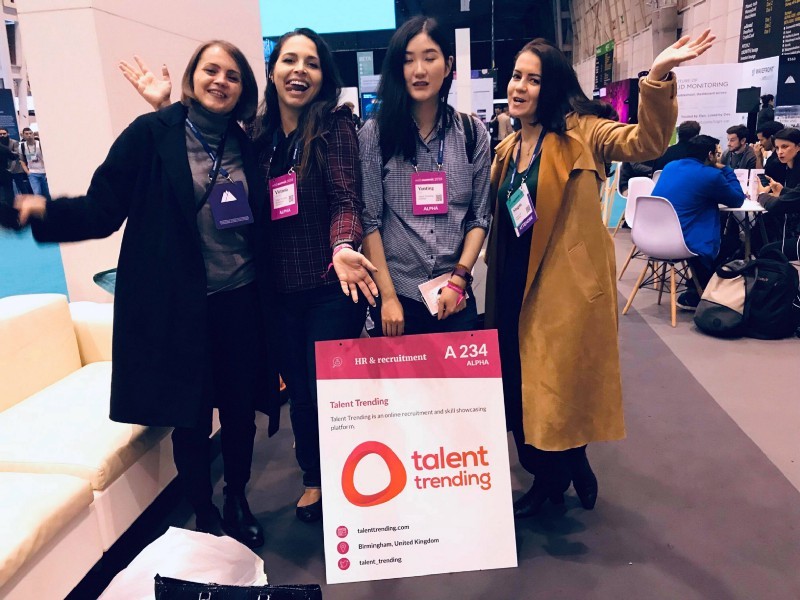 We got a bonus on for our top Web Summit takeaways we couldn't keep in secret. It’s true what they say — the best things happen unexpectedly. NightSummit is all about turning your head around and waking up having meaningful conversations with like-minded people. It’s networking at a whole new level. (We call it Level Unicorn) 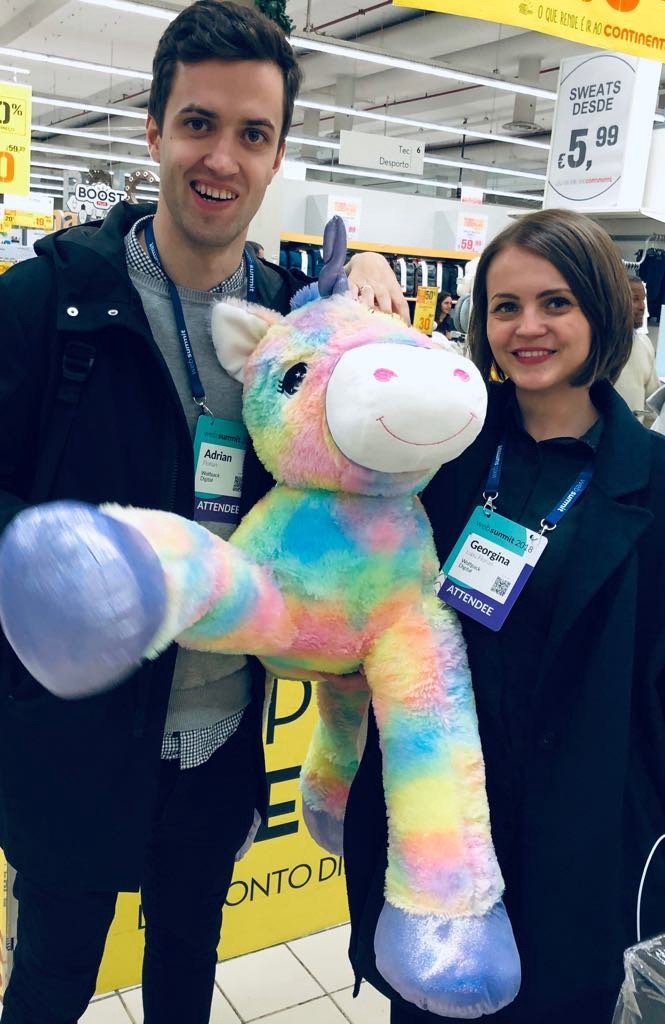 Look, guys! We have found a Unicorn in Lisbon. Blame it on the Web Summit.

The time will pass, tomorrow is going to be another day of great discoveries, but what we are left with for today are the impressions, new neurons gained from the talks, and the things to share with you. See you tomorrow! 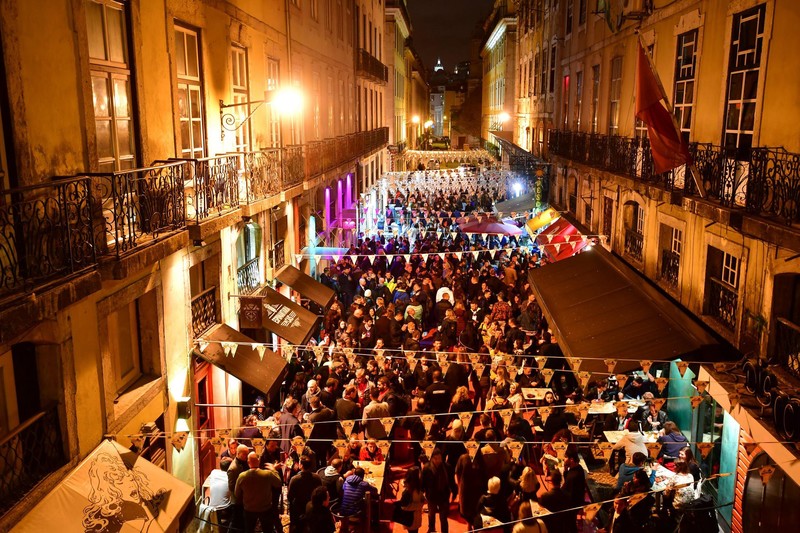